The idea of interpreting this conversation about growth and acceptance with flowers came from the graphic relationship between potential, growth and blooming, that I found while listening to Suzy and Bridget talk about the potential they see in people and in themselves and the disappointment that often comes with it. This is the reason I choose to follow the growth of the pink flower, who is unsure of growing and blooming, something that flowers are supposed to do but when she had a bad experience with others, left her unsure about it. She fulfills her potential only when she finds a real friend, with whom she can learn from and bloom together, leading her to accept herself and finally open.
Release date
PROCESS
1. Beatboard
I am a hands on drawer and I do make stories directly on images. Thinking about the beats in the phrases and even the palette I wanted to use to set the begining tone of the story while I was re-revising it.
I wanted to do a short film by myself to learn bits of the entire process, i had a deadline and from the begining I visualized it to be able to work with minimal backgrounds and at the same time have my desired atmosphere of growing. 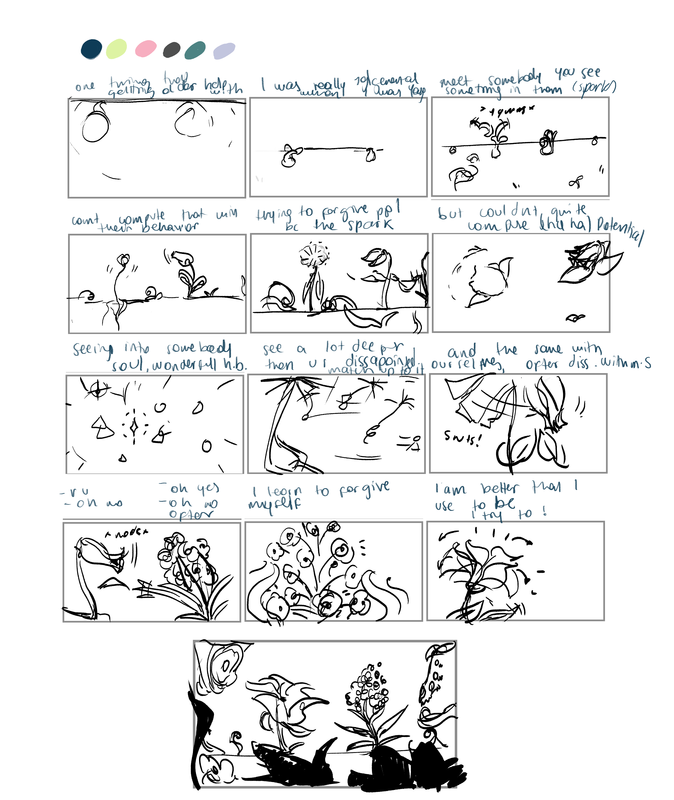 2. Schedule
I learnt the most important lesson: plan everything even the parts where you need to be flexible.
It is by far the most important part, even more for the animation since each shot has its own value and you need more time for some, other are easier.
2. Studies
To get the story rythm, and later on the animation right I studied plants growing also to give a personality to my new beloved characters.
Knowing the options for shots I had for the board and how timeconsuming it would be. Thinking several steps ahead is one of the many important things a director has to do so everything fits in the exact moment it is needed. Avoid surprises that can be a downfall for the entire project. 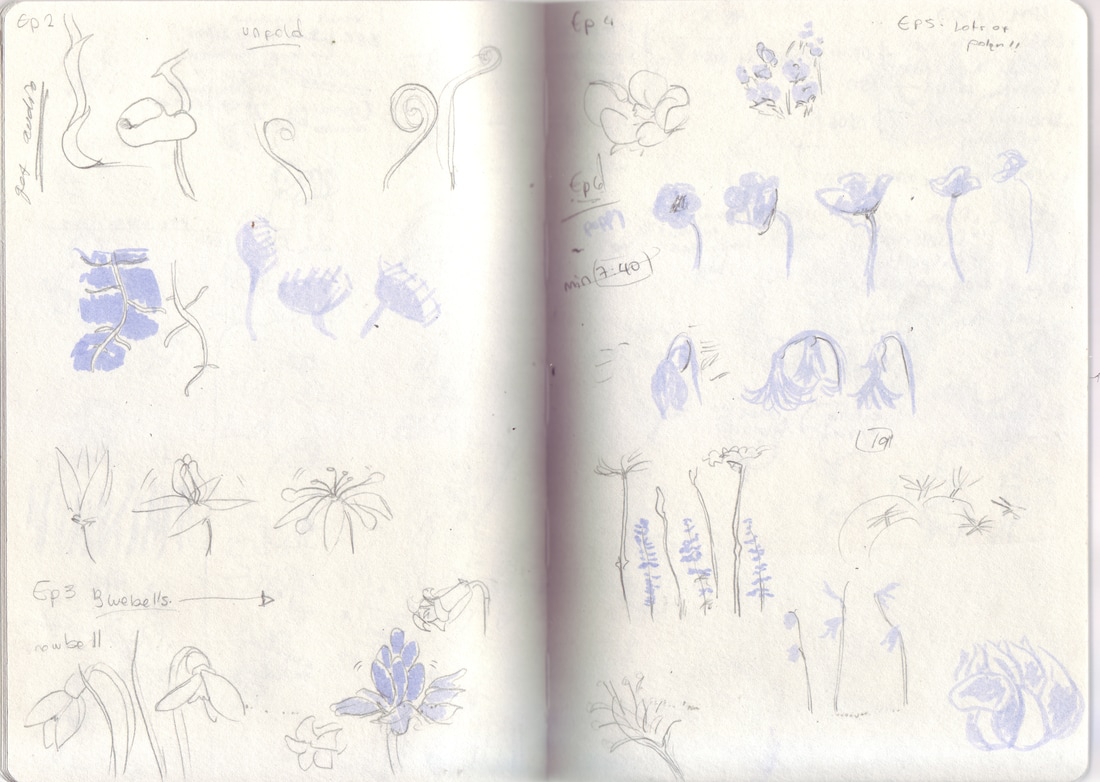 3. Storyboard and Animatic
My favorite part. Figuring out timing for some shots and being decisive about if something is needed or not. being as clear as I can.
And several versions of each so it keeps working on, figuring out if the rythm is good or if some gesture is confusing.
if it is not in the animatic it wont be on the animation, in my case I could make decissions while animating later on,because I was doing everything, but at the same time could see how it could be a problem for someone else. And fixing it. It is so important to be as clear as possible it also keeps on developing the characters and designs, being perceptive about it is the key. 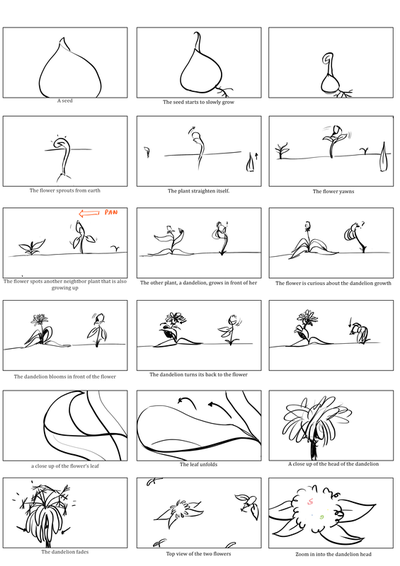 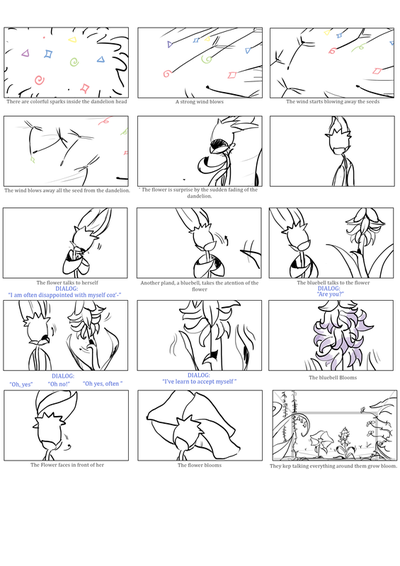 4. DESIGNS
Character sheets and promts, how to make a character likeable and beliveable...and also them being flowers.
I wanted to have a flower do lipsync and still move flowly and delicate to watch them grow. 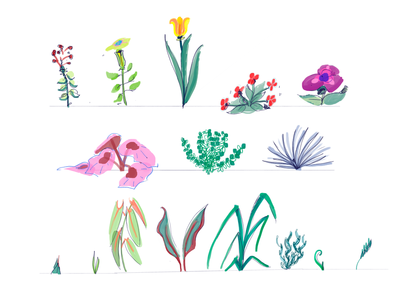 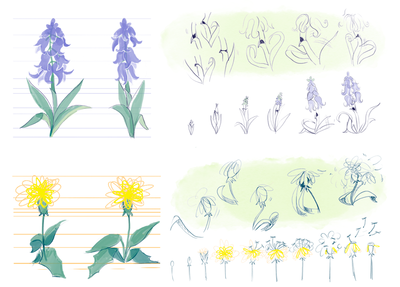 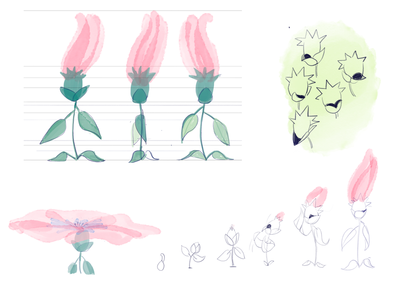 This is my animation schedule and marking the process every day is important. You need to be able to sit one day and say: i need to work more on this one so i may aliminate the entire background of one scene and it has to be so well planned that it can actually be done without comrpomissing the quality and general sense of the entire film. Having time to be flexible. Planing the most complicated things. Knwing when a background have to be done and knwing what to compromise.
​
5a. Animation
The acting the timing, it was all done in TVPaint and following a thinght well planned schedule.
following that deadline was key to have it all done on time.
5b. Backgrounds
I wanted to play with the minimal but feeling that the flowers were prt of something bigger, growing and realizing their enviorment is part of the entire journey.
Having them ready at the same time as doing the animation to be able to put it all together on time was a challenge, that is why in the boards the background were mostly color blocks, and this one being the final scene, it was about the flowers having more around them. 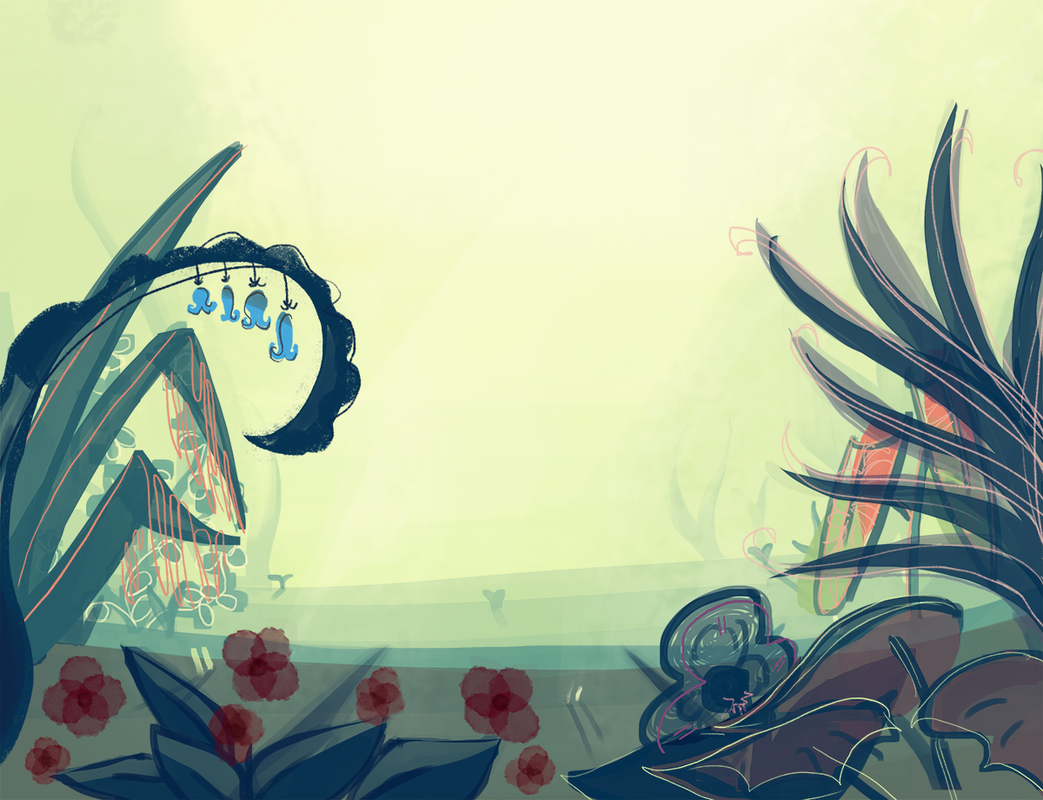 6. Composing
make sure to have everything correctly named and knowing exactly how a scene will go. Back up files and learning how to organize archives not only for yourself but for the software you will be using.